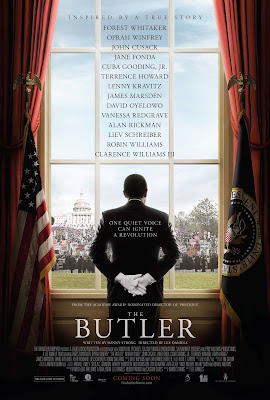 This weekend Matt and I finally got to see The Butler, we have been excited about this movie since we first saw the preview! Last weekend we watched a special on OWN about the film and the actors who played such important characters… it really pushed us into forming emotional attachments with this movie long before we bought our movie ticket. This is based on a true story of Eugene Allen the real White House Butler who served 8 Presidents. You can learn more about the true inspiring story HERE!

I am trying my best to accurately describe this film for you……..it is a must see. It is not because you will be “On your toes” not because it “was filled with action” but because this is a epic story….. weaved into real history that spanned over 90 years. Forest Whitaker is memorizing, both Matt and I thought that he gave this character so much life that it is honestly hard to describe but you will really see how life was thru Cecil Gaine’s eyes. I spoke about how the movie 42 based on Jackie Robinson is a true teaching film whether it is 100% fact or not, the film will open your eyes just as this film will do also! (You can read the 42 review HERE!)

Has anyone else seen this movie? Did you feel like it was as special as I did?