** Disclaimer** These are random topics that are in the news and I rarely weigh in online because I do not want to start a debate with anyone! This is just my “Quick Fire” thoughts……….. 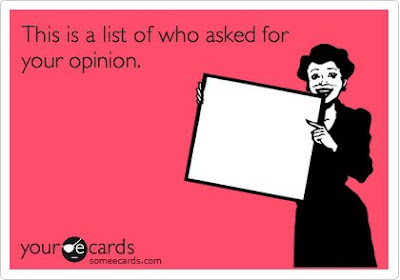 * Bachelorette
Could this season be anymore boring? I can barely watch it, I don’t connect with her or any of her guys. Maybe her brother should be the next bachelor, he seems like he would be more fun.

* A-Rod
I have never liked A-Rod, not even a little. But do you think he is at home thinking “Man, that was totally worth it”?? What is it with some Men/Athletes who think they are untouchable? Stupid

* Child Free People
This Time Magazine article called “Having it all now means not having children” you can read it HERE! The point is that this generation is all about “selfishness” but I don’t think so AT ALL. And not because I am one of these people currently…. But I think this “generation” should be called smart. Long are the days over where your sole purpose to get married was to have kids. It is also called smart realizing that you should not have a child because you can not devote your time and money to that child currently. In the past having a child was something you just had to do and if you were 32 like me and childless you were practically a leper. So I dunno……

* A remarkably candid Pope Francis struck a conciliatory stance toward gays Monday, saying “who am I to judge” when it comes to the sexual orientation of priests.
Why has this statement upset people so much? Do you not read the same Bible that I do? God says you are not to judge and I think sometimes people need to be reminded that their “Sin of Judgement” is the exact same in God’s eyes as the sin “you think” you are judging. It is insane to me how many people pick and choose what parts of the Bible to stand by and why? Maybe people also need to be reminded that the only time we will be judged is by God and we are accountable to him not “everyone else” and their beliefs.
Luke 6:37
“Judge not, and you will not be judged; condemn not, and you will not be condemned; forgive, and you will be forgiven”

* Anthony Weiner
I am not sure I will be able to get out all I would like to say about this A-hole. But in case you dont know here is the quick catch up…
1. Politican
2. Married with child
3. Sexts with young women and has online affairs
4. Politician is outed
5. Few months later him and his wife have a full glossy story in People about how wonderful he is and he is a changed family man
6. Politician runs for office again currently
7. Politician is outed once again for having online affairs…… the WHOLE time which he said he had “changed”
8. Second press conference to “confess” and his wife stands by him. She even gives a statement on his behalf.
Ok, you with me?
WTF? I could not believe the nerve of this guy, I have no words….normal people who did something like this that affected their career would have been fired. End of story. And the fact that his wife stood there admitting he lied and cheated AGAIN blah blah blah…….I was horrified. I am sure she has her own reasons but I would never let a friend of mine lower herself like that, I thought it was sad.
I dunno..I might be wrong but that is what I think.