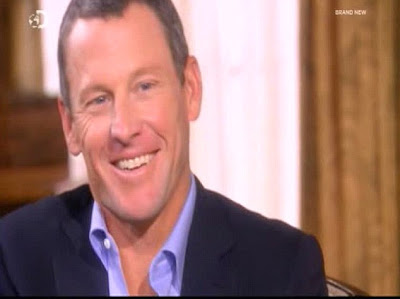 Ok, I have never been a Lance Armstrong fan or a fan of cycling so last night was really my first taste of who he is as a person and I was SHOCKED. This guy sucks, I was floored by his answers and his smug grin during the Oprah interview. This guy actually said I do not think I cheated, everyone was doing it and at the time I never thought what I was doing was wrong……..which means I am only sorry I got caught.?
I was watching Dr. Phil a few weeks ago a show about Narcissists and the people he had on the show seemed to smile or smirk while admitting to awful behavior…….Dr. Phil explained it this way….. a narcissist is actually proud of what they pulled it off, they unintentionally smile because they are like…..”Ya, I did that….and I got away with it for a long time” and I think that hits the nail on the head from what I saw in this Oprah interview.
When she was asking him about calling a teammates wife a “whore, Bi***, slut, crazy” he was actually smiling while admitting this. I was shocked at how much this person sucks, I mean he is an awful person. (from what I saw in the interview) I know that might be harsh but take a long look at that interview…. his answers were insane, I did not see one ounce of a true apology just that everyone was doing it so it isn’t wrong. And the ONLY thing he said he regretting was his 2010 comeback which lead to him being investigated……he said that if he didn’t do that he would never have been caught.
Anyways…..I just had to vent about this because I couldn’t believe what I was hearing and seeing the past two nights…… I discovered that Lance Armstrong is the most unlikeable person I have come across in a long time.