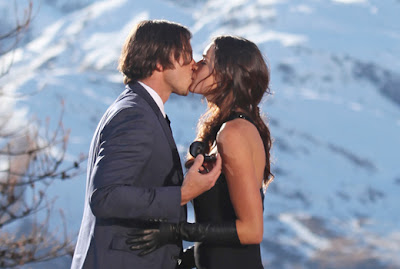 Ya ya….I know I am jumping on the bandwagon with about every other blogger I know and everyone girls I knows facebook posts but I can’t keep it inside. So I follow http://www.realitysteve.com/ and I knew it was Courtney from the very beginning and I still watched…why? WHY do I watch this show?
Ben is SOOO lame I don’t know where to start…………….oh yes I do….THE HAIR? Who? who? Told him that was a good look? It is so gross. It is always frizzy, the middle part grosses me out and it is always in his face….maybe someone should tell him he is:
A. Not a rock star
B. Not Brad Pitt

Things that bug me about this season: In no particular order………..
1. Picnics…….how original, I mean how many picnics can you have? I love how he says to everyone “lets just shop like a local and enjoy a picnic just like a normal couple” uh, not really Ben.
2. Helicopter rides….does anyone else but me get motion sickness?
3. “Vulnerable”- I get it Ben makes every girl feel so “Vulnerable” but if I hear that word ONE more time, I might scream.
4. “Hey Cow”- Thanks Ben for that way cool game…..Hey Cow!
5. Courtney, I see that she got her creepy lip thing from her Mom but can she tone down the baby voice? It reminds me of how Khloe K talks to Lamar…..yeck!
6. Was it just me or did you almost think that when Ben told Courtney it was her he picked that she was going to jump up and down and say “I won I won” in her baby voice? Nothing about that proposal seemed honest!? They both just stood there.
7. I loved how Ben told Lindzi (is that how you spell it)….”I have fallen in love with you, but I love someone else” what does that even mean? She didn’t seem to care though.
8. I read a magazine where Ben gave an interview and he said that on this show was the first time he has ever had to break up with someone in person! really? Isn’t he like 30? So I am guessing the whole time Lindzi kept bringing up how she was dumped via text Ben must of been like “uh….whats wrong with that”?

Ok, I get it….I watched this show every Monday…I am addicted but can we PLEASE get a good looking Bachelor next time? Someone who isn’t so lame? Ugg.
And please check out Reality Steve….he is so funny!