Some might ask me what do I hope to gain from certain posts I do reguarding animals? Lets take for instance several posts I have done over the last couple of years about the Taji Dolphins and the outstandingly heartbreaking documentary The Cove….I know for a fact that several of you watched the documentary and found out about something you had no idea that was happening in the world, and then many of you even helped out charitably for these beautiful creatures. And it is being educated on things like this that will lead to change. So I hope that you just might read this and have it spark an interest in you like it did to me when I came across this article yesterday. From here maybe we all can find a way to help or spread this message further. TONIGHT on Rock Center with Brian Williams there will a sad, cruel and heartwrenching story on Rhino poaching. These stunning creatures that God created do not have guns and cannot defend themselves against the pochers who fly above in helicopters shooting them so they can ultimately hack off their horn and leave them for dead. 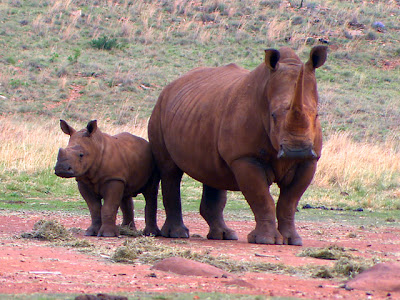 Here is a portion of the article on MSNBC that goes hand in hand with the story that will air tonight……..
Geza was one of our first four rhino that we introduced back into that wilderness area that basically then had rhino back on it for the first time in probably 160, 170 years,” Rushmere said.

In February of last year, Rushmere received a devastating call that poachers had attacked Geza and that incredibly, he was still alive. Rushmere alerted Fowlds who rushed to the reserve.
“I went in by myself and when I came around the corner and first saw him, obviously the first thing that strikes you is that there’s an animal that’s supposed to have horns on it and not only were the horns gone, but a large part of his face was missing too,” Fowlds said through tears. “It was just an all consuming sight of pain and agony and confusion. It was an awful thing.”
Rarely are poached rhinos found alive. The poachers had knocked Geza out with a tranquilizer dart and then hacked through his skull with a machete to get every inch of his horn.
To read the whole article you can click HERE!

So I hope you all will take time tonight like I will to watch the show, educate ourselves and see what we can do to help.? It literally makes me feel like throwing up when I hear of the awful things we humans do to and how we treat animals….it is sickening. No living creature dserves this.