Mikael Blomkvist, crusading journalist and publisher of the magazine Millennium, has decided to run a story that will expose an extensive sex trafficking operation between Eastern Europe and Sweden, implicating well-known and highly placed members of Swedish society, business, and government.

But he has no idea just how explosive the story will be until, on the eve of publication, the two investigating reporters are murdered. And even more shocking for Blomkvist: the fingerprints found on the murder weapon belong to Lisbeth Salander—the troubled, wise-beyond-her-years genius hacker who came to his aid in The Girl with the Dragon Tattoo, and who now becomes the focus and fierce heart of The Girl Who Played with Fire.

As Blomkvist, alone in his belief in Salander’s innocence, plunges into an investigation of the slayings, Salander herself is drawn into a murderous hunt in which she is the prey, and which compels her to revisit her dark past in an effort to settle with it once and for all. 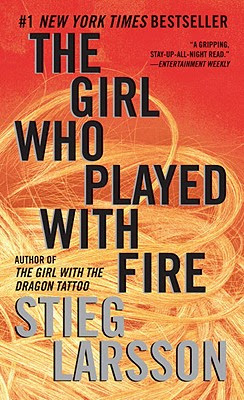 OK, if you remember my review of the Girl with the Dragon Tattoo (HERE) then you know I was not a huge fan. But after seeing the movie a few weeks ago I felt like the movie version really tied up everything in a tidy bow for me……..it made sense and more importantly it made me finally excited to read the sequels! So I just finished “Fire” and I have started “Hornets Nest” last night! I really really enjoyed The Girl Who Played with Fire….it kept me reading as fast as I could because I just had to find out what was going to happen next. The only downside is that there is like 30 characters ALL with similar names, I swear I needed a list to keep them all straight. But I really enjoyed this book and it was so much better than the first, the twists keep on coming until the end. Just so you know if you read this one …..make sure you already have book 3 waiting!
TGIF!!!!!