SO I posted about this “situation” last week when it broke in the news on my facebook and I am still bothered by this so I will take up arms here on my blog where I have a voice. In case you didn’t know our super busy President Obama took some time to call the Eagles where he then “praised” Michael Vick. He spoke about how second chances are needed, forgiveness and how wonderful Vick is. Ok, second chances I believe in but when a DOG MURDERER is our Presidents priority I am outraged. Don’t even get me started! Yes, I am a crazy animal rights activist-in-training but shouldn’t our presidents time be better spent?
The whole situation makes me feel literally like vomiting when I think about those poor animals the ones who passed, the ones who are still alive living with the past and what was done to them.
A fellow blogger left me a comment about a post she did regarding this story and I saw an open letter she posted written to our President from the Best Friend Animal Society Founder and I want you all to read it………….I know it is long but forge thru………I can not make it thru this letter without crying, crying for what was done to these animals and I can literally feel my heart breaking as I read this letter. Please pass this post on to others who love animals as much as I do. 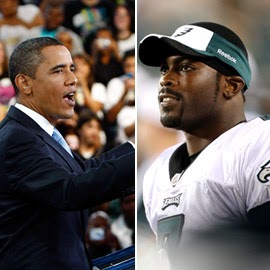 When the President Calls about the Vick Dogs
By: Francis Battista


Now that President Obama has jumped on the Michael Vick bandwagon with an official call to Eagles’ owner Jeffrey Lurie to congratulate him for giving the quarterback another chance, all of us here at Best Friends are waiting for a call from the White House to congratulate us for giving Vick’s dogs a second chance. I’m quite sure that the other organizations that also took on some of the canine survivors of the football star’s dogfighting operation are similarly poised.


The conventional wisdom on this is that the president’s people have put their finger to the wind and decided that Michael Vick has been sanitized for political consumption by his success. (It’s interesting to speculate how he would be perceived if he were having a lousy year.) Personally, I’m kind of tired of hearing and reading about Michael Vick and wish that the media would lose its obsession with the man, especially since any mention of or concern about the dogs who managed to escape with their lives from his care is conspicuously absent from his public statements.


While we no longer wait by the phone for a call from Mr. Vick asking after his dogs, the likelihood of a call from the president has brought new esprit to the switchboard team and I’ve put together some notes on those we call the Vicktory dogs in case someone puts the historic call through to me by mistake. The conversation will go something like this:


“Mr. President, what a surprise! Thanks for taking the time out of your busy schedule to commend us for giving the Vicktory dogs a second chance. Sure, I’ve got a few minutes to fill you in … kind of a presidential briefing, I guess.


“To be quite honest, sir, it’s kind of a mixed bag as far as how the dogs are doing. After all, these critters were right there when Michael Vick and his friends were body slamming some of their doggie buddies to death and electrocuting, drowning and hanging others. Unlike Mr. Lurie and the NFL, Bad Newz Kennels wasn’t into second chances. What’s that, sir? Yes, he’s having a great year … yeah, a terrific arm.


“So, as I was saying, it’s a mixed bag on the dogs, though some are doing very well, all things considered. Handsome Dan, Cherry, Mel, Oliver and Halle have all been adopted and some of these guys were pretty shut down, you know, terrified when they arrived here. Mel was mentioned in Bill Plaschke’s article in the L.A. Times about Michael Vick … yeah, he interviewed Mel’s new family in Texas. Poor dog still shakes in a corner whenever a new person comes to the house, but he’s in a great home and that’s what counts.


“What’s that, sir? Sure, we want them all to be adopted and live in homes with a nice family, but unlike Mr. Vick, the court has ordered that most of the dogs, based on their behavior evaluations back in 2007, have to pass a good citizen test before they can be adopted. No, I’m serious. It’s called a Canine Good Citizen certificate, CGC, and it means that the dogs are able to demonstrate self-control, sociability and friendliness toward people and other dogs. Actually, it’s quite an accomplishment for a dog who was encouraged to be aggressive or maybe was used as a bait dog. Sir? Oh, a bait dog is a relatively non-aggressive dog who gets thrown into the ring with a stronger fighter just to give the stronger dog confidence and a taste for blood. That’s right, sir, kinda like a press secretary.


“Anyway, 16 dogs are still at the Sanctuary: Mya, Shadow, Lucas, Layla, Willie Boy, Georgia, Meryl, Ellen, Tug, Denzel, Ray, Squeaker, Lance, Curly, Little Red and Oscar. And they get a lot of attention. Most of them have health issues; some have bebesia, a blood parasite that spreads among fighting dogs and flares up occasionally. Some have immune problems that we speculate came from excessive use of steroids, but they continue to make progress.


“Ray, who was really shy and dog-reactive when he arrived, has earned his CGC. Oscar got his CGC and Shadow has made such great progress that he has a potential adopter coming to meet him next week. We’re very pleased. Most of the dogs are now social enough to share a run with another dog and some spend a few days a week in staff offices, getting comfortable in new environments with people coming and going. Yes, I guess it is a bit like the new Congress, except that most of the dogs would never bite you and I doubt that Congress people are able to share a run, um, I mean, an office.


“Why do we do all this for these dogs? Well, Mr. President, that’s a big question but I’ll try to keep it short. First of all, we don’t believe that killing the Vick dogs, which many people and even some animal organizations wanted to do, would have been right. We know that they are individuals with the potential to have rewarding lives. They were like child soldiers kidnapped by warlords and forced to fight; no one thinks child soldiers should be killed just because they are damaged. Same thing applies here. Also, the Vicktory dogs are victims of a crime. As long as they are struggling to regain even a semblance of the life that should have been theirs from birth, then that crime continues to affect lives, dog and human, and is not yet a thing of the past, regardless of Michael Vick’s jail time or talent. You’re right, sir, it’s not funny and I’d hate to think of Bo in that situation, too.


“Of course, no worries! I’ve got a pretty busy day as well. Nothing like yours, but thanks for calling and please pass along a Happy New Year to Michelle, the girls and Bo from all the animals and staff here at Best Friends…. Oh, just one more thing: I think it would be a great message to send if you adopted a shelter dog as a companion for Bo, maybe a cute pittie girl with a big smile and wiggly butt. Sure, we can set you up. Call anytime — you’ve got the number. And a good day to you, too, Mr. President.”
Francis Battista
Co-Founder, Best Friends Animal Society