So I finally got something for Christmas that I have been wanting for over a year. Yes yes, before it was so popular and on the nightly news! I have adopted an elephant in Nairobi, Kenya! My lovely grandparents gifted me with adoption for Christmas! I hand picked this resilient little girl! And I love her! Let’s start by learning about the David Sheldrick foundation…….This coming Earth Day a documentary is coming out about this place….this fills me with love…

Here is my sweet baby………….I told Matt I wanted to visit her for my 30th Birthday! LOL 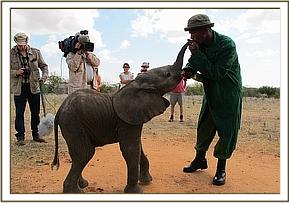 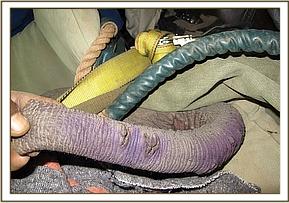 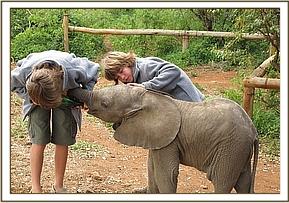 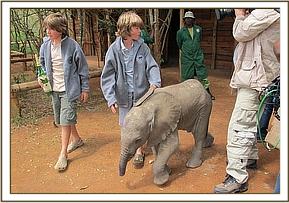 I know this is long but read the story about Naipoki……………

We received an early morning call from Jane Craig at 7.00 am reporting news of a tiny baby elephant that had been rescued from a well in the Namunyak Conservation Area, that was in the safe custody of Hilary and Piers of Sarara Camp. The Kenyan Wildlife Service then called having been alerted about the calf with the same news and we immediately scrambled a team of Keepers and they were at Namunyak in Northern Kenya by 10.30 am

The baby, estimated around three months old, had experienced a very traumatic couple of days. Initially she was rescued in the early morning of the 13th when Sumaina Lesirite, a community Moran, reported to the Namunyak Conservancy headquarters an elephant calf had fallen into a well. She was immediately rescued and all attempts were made to locate the calf’s mother and herd to reunite the baby. Finally, the evening of the 14th , everyone was delighted when their hard efforts were rewarded and they managed to locate the herd.
Unbelievably Sumaina Lesirite reported the same calf fallen down the same well the following morning of the 14th of December. This time her trunk had been chewed by predators during the night, and she was visibly much weaker, and in desperate need of milk. Maybe the herd she was reunited with was not her own, and she had fallen down the well again desperately trying to drink, or maybe the herd frequents that particular watering point while in the area and accidentally she slipped in a second time. Piers and Hilary from Sarara Camp initiated the second rescue and the calf was returned to the camp while they waited for the rescue crew from The David Sheldrick Wildlife Trust to arrive.

Once the plane and keepers landed at the airstrip she was fed re-hydration liquid which she guzzled, along with a couple of bottles of milk. She was obviously desperately hungry and terribly tired. She was tied and strapped for the journey and slept throughout most of the flight, seemingly totally calm. On arrival at the Nairobi Nursery she fed again, and her strength began to return. She was now inclined to shove the Keepers, but not for long as she soon collapsed on the soft hay in her stable and slept solidly for a further three hours
She has been called Naipoki by those who worked so hard to save her from the Namunyak Conservation Area, named after the lugga where she was reunited with the herd on the evening of the 13th. In the Maa language Naipoki means ‘something painted’. She comes from exactly the same area as Wasin, and the two of them make a endearing miniature pair, their friendship already forming, and one we hope will last for a life time.

So when I get all my official certificates and information about Naipoki I will keep you updated! This is the BEST present ever!